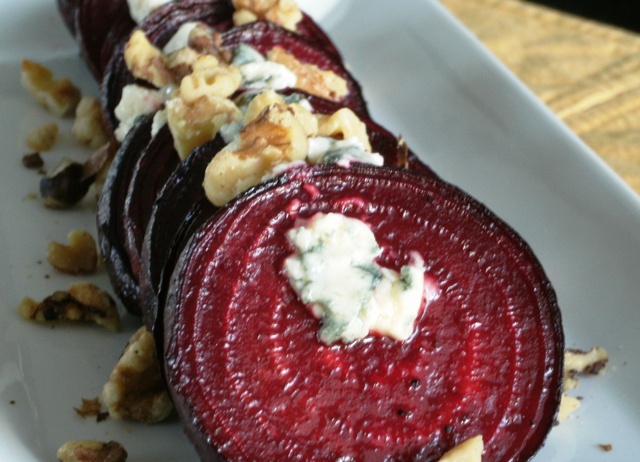 I did not grow up eating beets. My parents were not adventurous eaters, and beets just looked too odd, what with that startling crimson color and all. I was probably in my 30’s before I had ever voluntarily tasted beet roots, and I was hooked from the beginning.

I was watching TV the other day and came across an episode of Gourmet’s Diary of a Foodie. I’ve seen it a few times, but it can be a little esoteric for my tastes. I’m not knocking it. It just isn’t my cup of tea, so to speak. But this one featured a dish that had my mouth watering: Pasta with Beet Greens. There was really nothing to it, just some pasta with onions, cured olives, some pine nuts, and beet greens. It had my mouth watering so much that I had to pick up a bunch of fresh beets with the tops when I was at the store so I could make it. But it left me with a dilemma: what do I do with the beet roots?

Part of what attracts me to beets is their ability to taste both earthy and so sweet at the same time. It really is a unique flavor, isn’t it? I usually roast them simply, with a little olive oil, salt, and pepper. No fuss, no muss. Of course, now that I have to come up with something interesting to write about on a regular basis, I can’t really rely on simple now, can I?

The problem is that you don’t want to do too much with beets. Like I said, part of their appeal is their singular flavor. If you add too much, the flavors begin to compete, and then you’re left with a mess.

I started by adding some balsamic vinegar to the olive oil and let the beets marinate for a few minutes. Then I tossed in just a sprinkling of thyme to highlight the woodsy flavor. A little salt and pepper, and there you go. Still simple but right, you know? For presentation sake, I also sliced the beets before I marinated them. Laying them out on a baking sheet that way also cut the cooking time from 50 or 60 minutes for whole beets to about 25 minutes for the sliced version. Then I hit it with the secret weapon: sweet, creamy, and tangy gorgonzola cheese.

I don’t think there’s a better flavor combination than blue cheese and something sweet. Dates, figs, ice cream, you name it. So why not add a little gorgonzola to contrast the sweetness of the beets? (My mouth waters just thinking about it.) So I had earthy, sweet, tart, and tangy. All I lacked was a little crunch. Another natural pairing with blue cheese (I think) is nuts. So I toasted a handful of walnuts and sprinkled over the top.

Let me tell you, the key to this dish is getting it all in one bite: beet, cheese, and nut. It’s to die for. This side dish is so great, that I think you should serve it with a main course that has very simple flavors, like a simple sautéed chicken breast (which is what I did). Just salt and pepper in a sauté pan. Let the beets be the star of the dinner. You know, just beet it. 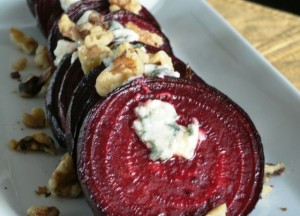 This post was reblogged from my earlier site, Inexpensive Eating.