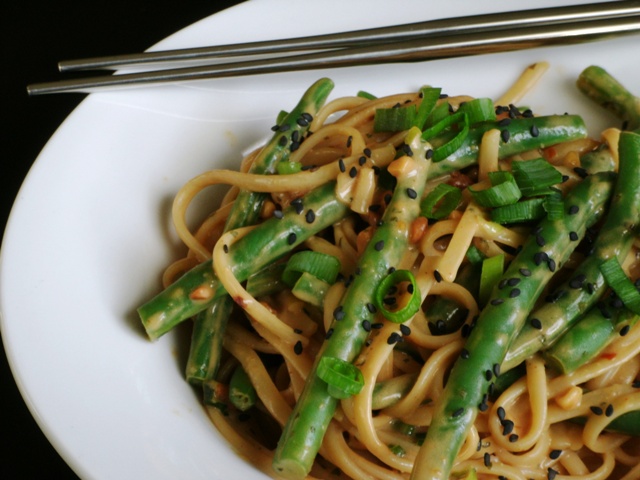 When I was a kid, one of my favorite things to eat was pasta and peanut butter. I don’t even know where I got the idea. Mom didn’t make it, my brothers didn’t eat it, but I absolutely loved it. In fact, I think my brothers’ collective reaction was ‘Eew, gross,” when I made it. They just didn’t know what they were missing.

I still get a craving for it every once in a while, but I won’t make it unless there are no witnesses (I guess I don’t want to illicit the same ‘gross’ response from people). But I can get the same satisfaction out of an Asian peanut sauce with noodles. No one seems to turn their noses up at that, for some reason. It’s basically the same thing. But hey, if I can merge pasta and peanut butter without people reacting negatively, then I’m all for it.

It’s not exactly diet food, but it tastes pretty light. Adding veggies is a way to lighten it up and round out the meal. Believe it or not, sautéed celery is pretty good in the dish, but I had some green beans in the fridge. Wasn’t sure if the green beans would work out, but it came together pretty well.

Green beans are one of the rare vegetables that I like overcooked (yet another thing to blame on the culinary habits of my childhood). I’ve spent several years in a twelve-step program to learn not to overcook green beans (with a pound of bacon). It’s a slow process. I won’t sit here and tell you that I love crunchy green beans yet, but I’ve learned to appreciate them (even without the bacon).

The fact that this recipe comes together in a short amount of time is a bonus. I can throw the peanut sauce together while the pasta water comes to a boil, blanche the green beans in the same pot, and have it on the table in about 20 minutes.

So maybe I shouldn’t be so self-conscious about my childhood favorites. It’s just a matter of tweaking the concepts just a tad. Now to get to work on making mayonnaise and banana sandwiches presentable.

this post is reblogged from my earlier site,’Inexpensive Eating’.

Fabulous! We love our new kitchen! We will use you for all our future remodeling projects! Thank you all so much!