Ah, the weekend, the only time of the week when every-single-freaking-minute of my day is not scheduled. It’s nice to have one morning a week when I don’t have to be up and out. It gives me a chance to make something a little nice (and a little naughty) for breakfast. For that, there’s nothing like the taste of homemade cinnamon rolls – warm, yeasty, buttery bites that take a little time, but are totally worth it.

The problem is – I can’t wait 2 or 3 hours while I put a yeast dough together and watch it proof twice before I bake it. And of course, I can never get my act together before the weekend to prep the dough and have it ready to pop in the oven when I get up on Saturday morning (if you are that organized, keep it to yourself – you make the rest of us feel bad). Because of that organizational deficiency, I’ve been perfecting this cinnamon roll recipe using quick bread methods over the last couple of years.

This recipe is great – it gives me the satisfaction of warm, spicy cinnamon rolls in well under an hour. It’s really just my grandmother’s biscuit recipe repurposed and jazzed up. But let’s face it: the cinnamon roll is just a delivery device for the glaze. And this sour cream glaze delivers a little tang to go along with its sugary sweetness. When I first put this recipe together, I thought that it was a little too much glaze for a dozen cinnamon rolls. Then I realized: there could never be too much glaze.

I usually make the entire dozen for just the two of us. I’m embarrassed to say that most of the time they are completely devoured before noon (I’m not sure if that actually means the cinnamon rolls are good or we’re just that gluttonous). By then, we’re both hungry again, and it’s time to start making lunch – hey, maybe I just answered my own question… 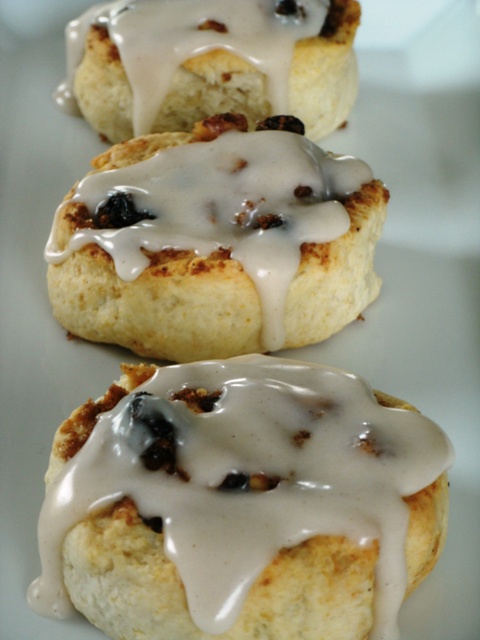 This post is reblogged from my earlier site, ‘Inexpensive Eating.’

Everything from start to finish was great!