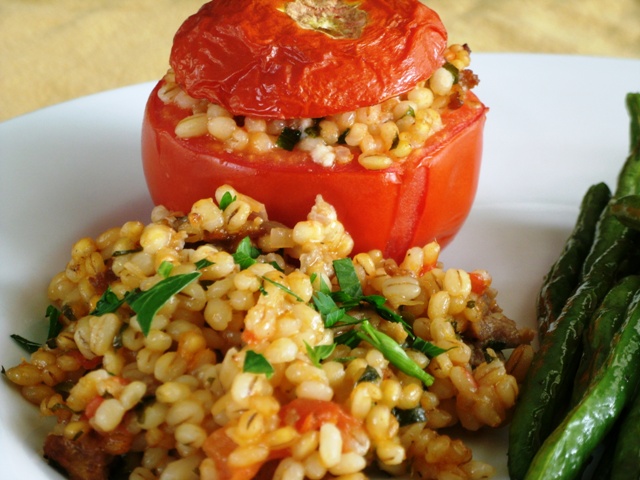 I’ve been in a rice rut lately. I’ve got long grain, short grain, white, brown. I’m tired of rice. I love quinoa, but unfortunately quinoa is a little out of the budget for the immediate future. So while I was roaming through the grocery store this week, I noticed pearled barley.

I’ve used barley once or twice before, but only for mushroom and barley soup. I’ve never really branched out and used it in any other way. Since it’s actually less expensive than white rice, I grabbed some and started mulling some ideas in my head.

Right away I’ve noticed that barley is kind of like Rice Plus. Like rice, it has the starchy capability to thicken liquids as it cooks, and it has the added benefit of a more hearty texture. You can really sink your teeth into grains of barley. I like it, and it’s been underused in my kitchen for far too long.

I haven’t had any vine ripe tomatoes in a while because the grape tomatoes have been so cheap and so sweet, but the season must be over because they were back up to their normal prices. So I picked up some tomatoes that I could stuff, not sure what I was going to stuff them with.

I decided to give it an Italian feel by pairing the barley with some sweet sausage and parmesan cheese. In a frugal step, I used the tomato pulp that I removed before stuffing to prepare the barley and just added a little more chicken stock. It was totally the right call.

When I stuff tomatoes, I purposely make too much stuffing. I like to fill the baking dish with the extra stuffing, which allows it to get a little crunchy and contrasts with the texture of the tomato version. The little bit of parmesan cheese helped the crunch factor along.

The vibrant red of the tomato on the plate just screamed for a green counterpoint, so I obliged. I paired the stuffed tomatoes with some simple roasted green beans that I tossed in a little lemon vinaigrette.

Of course, you can substitute any grain of your choosing instead of the barley for this recipe. But why would you? Really the barley was barely any trouble.