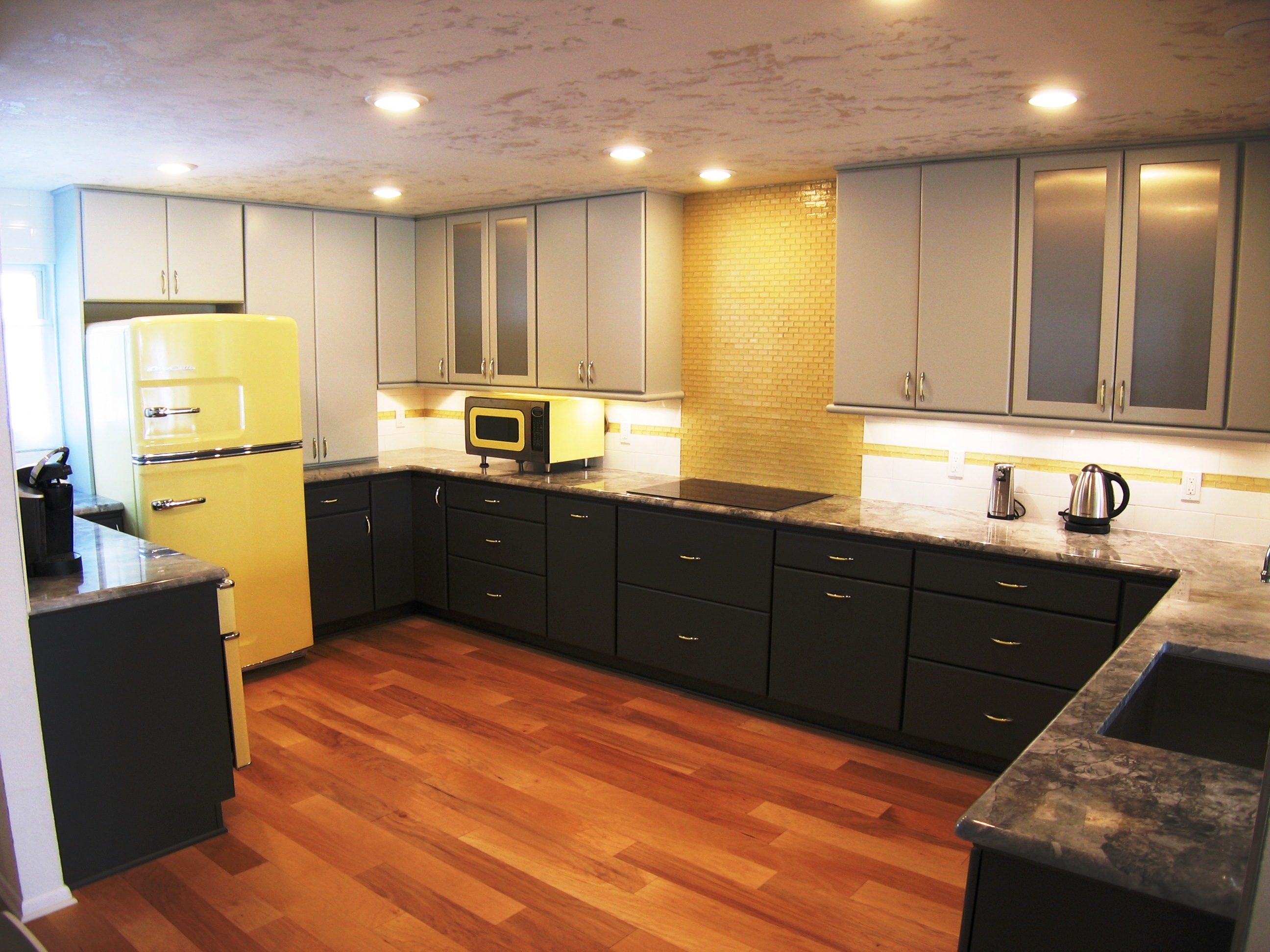 Buying a riverfront condo in Palmetto gave a recent client the perfect excuse to revive a style she had long admired – and she had definite ideas for the final look. Before she even found me, she had purchased a suite of appliances that look as if they were plucked right out of June Cleaver’s kitchen. Big Chill Appliances have a vintage look that conceals the most current technology. The client’s choice of Buttercup Yellow became the focus of all other selections. Her desire to have that creamy warmth jump off the wall led to selecting finishes  in 2 complimentary gray tones from Starmark Cabinets: Pearl for the upper cabinets and Peppercorn for the bases, creating a neutral backdrop to highlight the intended focal point. It’s as if Ted turner began colorizing a black and white rerun, but stopped after the appliances were finished.

Finding a countertop to tie these colors together was the biggest challenge – and the last selection made. Two different gray finishes, white tile, and yellow appliances created some obstacles. Many, many choices were considered and then discarded. Finally, we literally stumbled across Super White granite. It was the perfect thing to make a cohesive space and not detract one little bit from the appliances. Being a condo, the kitchen was compact and closed off. Eliminating the breakfast area, a pantry, and coat closet (“Who wears coats in Florida anyway?”) allowed a dramatic transformation of space and ergonomic function. The result was an open floorplan that defies the mid-century norm which saw kitchens isolated from the rest of the living area. “I want everyone to see these appliances,” was her response.

To make up for the loss of a pantry, storage accessories lurk behind every cabinet door, making efficient use of all available areas. Full corner access, roll out trays, soft-opening trash storage, pan drawers, and even a lid rack put every item at her fingertips. We further decided to thumb our nose at a strict mid-century interpretation by adding stainless steel panels in place of glass doors in a few cabinets.

The one drawback was the cooking appliance. Since Big Chill only manufactures gas ranges and this project was in an all-electric high rise, a compromise had to be struck. The solution was a separate oven in retro, buttery yellow and a modern induction cooktop. (One change I would have made – a hood for the cooktop.) The client was adamant about eliminating a vent system that she would never use. Since building codes didn’t require it for this situation, the client got her wish. In its place, a large section of yellow glass block was added in the field of white subway tile on the longest wall of the room. This room wasn’t designed to appeal to everyone. It is as unique and bold as the client who occupies it.

BEFORE: Looking from the living room

AFTER: Open and Inviting

BEFORE: The small entry into the kitchen

AFTER: Plenty of space

BEFORE: An unused breakfast area and pantry

BEFORE: Out with the old

AFTER: In with the new

AFTER: Unique and Bold