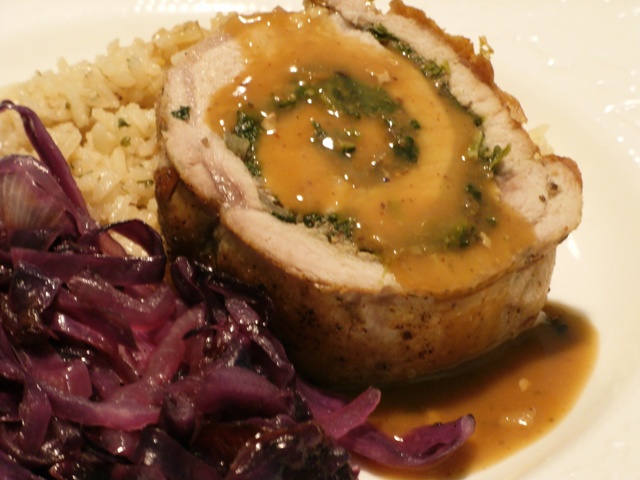 Some good friends are getting ready to head north for the summer (that’s the problem with living in Florida: no one else lives here year-round), so we decided to get together for one last dinner party before they head to the Arctic Circle (OK, they’re summering in New Hampshire, but that’s close enough for me). Even though we were not hosting the evening, somehow I ended up preparing dinner – again.

I didn’t want to do BBQ and burgers, and I also didn’t want to do a formal, sit-down affair. Comfortable but nice is what I was going for. I’ve done too much chicken, seafood, and pasta recently, so I was grasping for something different to make. That’s when I decided to play The Game.

The Game is stupid and is only played in my head. I usually only play it on Friday and Saturday, because the conditions aren’t right the rest of the week. It’s kind of like my own private version of Iron Chef. The goal is to make dinner for company using only what’s in the house. A trip to the grocery store disqualifies you, and you lose. (OK, I’m the only one keeping score and the only one playing – why are the rules so stringent?)

Combing through the fridge, freezer, and pantry I came up with pork loin, purple cabbage, chocolate, spinach, rice, an orange, and mushrooms. So I flagged the chocolate and orange for a dessert. I knew the cabbage, spinach, and mushrooms would work with the pork, but I wasn’t sure how to put it together. So I started playing with ideas in my head.

I thought about roasted pork with some sort of glaze, but that sounded boring. Spinach and rice sounded blah. Then I happened to remember the Beef Wellington I made last Christmas. There was a duxelles spread on the puff pastry before it was wrapped up. So I zeroed in on Pork Wellington, but I didn’t have any puff pastry, and going to the grocery store meant I’d have to accept defeat. So I started playing with the idea of stuffing the pork loin with a knock off of a duxelles with mushrooms and spinach. Instead of pulling out a recipe, I just decided to wing it and came up with this stuffing.

I also remembered Dijon going into the Wellington, so I brushed the pork loin with mustard before adding the mushroom mixture (and who doesn’t like mustard with pork anyway?).

Sautéing the cabbage became a no-brainer after that. Besides, the plate was going to need some color. I think purple cabbage tastes so much better than green cabbage. It’s sweeter, especially when it’s sautéed with some onions. Green cabbage always tastes a little bitter to me. I rounded out the meal with an herbed rice.

All of this gave the dinner a little more class than a BBQ, but it wasn’t anywhere near stiff and stuffy either. The roulade looked pretty on the plate, and I scored with the entrée. Dessert, on the other hand, needed some work. (I’ll spring that on you when I perfect it – it’s still a good idea, just wasn’t executed well.)

All in all, I think the score in my head was an 8.7 (that East German judge always brings down the average). Oh well, it’s just a game. Right? 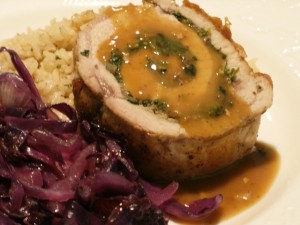 This post is reblogged from my earlier site, ‘Inexpensive Eating’